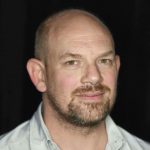 Mark-David Hosale is a computational artist and composer. He is an Associate Professor and Chair in Computational Arts in the School of the Arts, Media, Performance, and Design, Toronto, Ontario, Canada. He has given lectures and taught internationally at institutions in Denmark, The Netherlands, Norway, Canada, and the United States. His solo and collaborative work has been exhibited internationally at such venues as the SIGGRAPH Art Gallery (2005), International Symposium on Electronic Art (ISEA2006), BlikOpener Festival, Delft, The Netherlands (2010), the Dutch Electronic Art Festival (DEAF2012), Biennale of Sidney (2012), Toronto’s Nuit Blanche (2012), Art Souterrain, Montréal (2013), and a Collateral event at the Venice Biennale (2015), among others. He is co-editor of the anthology, Worldmaking as Techné: Participatory Art, Music, and Architecture (Riverside Press, 2018).
Mark-David’s work explores the boundaries between the virtual and the physical world. His practice is varied, spanning from performance (music and theatre) to public and gallery-based art. His interdisciplinary practice is often built on collaborations with architects, scientists, and other artists. Prominent ongoing collaborations exist with the IceCube South Pole Neutrino Observatory with Rob Allison and Jim Madsen; and in Performance, Art and Cyber-Interoceptive Systems (PACIS), with Erika Batdorf, Kate Digby, and Alan Macy.
He is the founder of the nD::StudioLab, an adaptable space for research-creation based theoretical discourse, methodological development, and the production of works in the areas of ArtScience, Computational Art, and Interactive Architecture. His research work emphasizes methodological development in the integration of hardware, software and digital fabrication with the goal of creating eversive works that blur the divide between the virtual and the real. He is also invested in a parallel theoretical practice that has been focused on a concept called worldmaking. Works that focus on worldmaking challenge the World and how it could be through a kind of future-making, and/or other worldmaking, by creating alternate realties as artworks that are simultaneously ontological propositions.
The connecting tissue in his work lies in an interest in knowing. How do we come to know something? How do we know we know? And, how do we express what we know to each other? Through immersive art we are able to create new experiences that saturate perception, expressing concepts that are beyond language and only genuinely knowable through the senses.