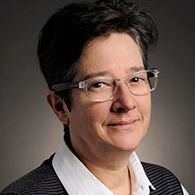 Nina Levitt works in photography, video, sculpture and interactive technologies. Her practice is primarily concerned with the ways women have been imaged and imagined in popular culture. From resurrecting lesbian pulp novel covers in photographic works made in the 1980s to video installations about women in space to her recent obsession with women spies, Levitt often relies on the recovery and manipulation of existing images and texts. Her theoretical interests are wide-ranging including photographic history & theory, gender, feminism, archival theories & practices. She is currently researching the life and work of Victorian photographer Alice Austen.

A graduate of Ryerson’s Media Studies program (1980), she received her MFA from the University of Illinois at Chicago in 1997. Before joining the faculty at York in 2004, she taught video at the Art Institute of Chicago and was Adjunct Professor in the New Media Program in the School of Image Arts at Ryerson University from 1998 to 2003. She was one of the co-founders of Toronto Photographers Workshop where she worked as its first Program Co-ordinator until 1992.