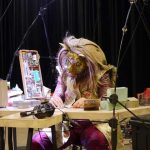 Burnish is an interactive performance installation that premiered at the 56th Venice Biennale 2015 with 9dragonheads in the official collatoral event Jump Into the Unknown; and at Toronto’s Theatre Center in May 2015. It was remounted for SummerWorks 2016 at Toronto’s Theatre Centre with a new concept for the tent, technology and audience participation. Created by Erika Batdorf and Mark-David Hosale. 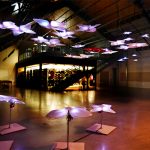 homunculus agora (h.a) is a large-scale architectonic installation of several dozen sculptural bodies (homunculi) that are organized in a fluid-like cluster. Created by Mark-David Hosale. 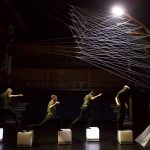 Lighting itself with energy created by the dancers, the audience and renewable sources, vox:lumen imagines a situation in which the necessity of illumination structures every human interaction. The performance confronts the audience with the most elemental metaphor for understanding, as dance becomes the interplay of darkness and light – the light we make ourselves. Set designer and Technology Consultant: Ian Garrett 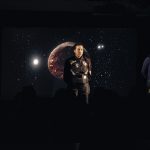 transmission is an immersive theatre production that tells the story of two brilliant sisters selected to join a mission to meet our celestial neighbors. Their story is told through a live show at the 2017 Edinburgh Fringe Festival, a podcast, and several site-specific, augmented reality scenes that are linked to specific locations throughout Edinburgh. Created by Ian Garrett. 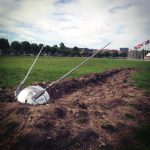 Sputnik Returned is a stainless steel sculpture which consists of a replica of the first manmade satellite to orbit the earth, Sputnik, installed as if it has fallen from its orbit and crashed back to earth. It is installed as part of Sculpture by the Sea 2013, in Arrhus, Denmark. Created by Brandon Vickerd. 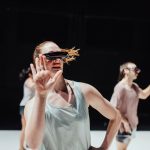 CPA [Consistent Partial Attention] offers a paradoxical meditation on what it means to be present in our contemporary screen-obsessed world. Developed through digital collage the CPA [Consistent Partial Attention] performance is guided by a video score of pre-existing / found Internet footage of individuals improvising in their homes.  Comprised of performers/dancers Freya Björg Olafson, James Phillips, and Lise McMillan. 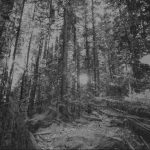 XL-Outer Worlds will result in a four-day Festival Celebration in 2019 at the Cinesphere, the world’s first permanent IMAX movie theatre located in Toronto at Ontario Place. This festival will showcase the commissioned films celebrating the invention of IMAX, alongside curated programs of early IMAX films. The XL-Outer Worlds festival will later tour the first IMAX cinemas across Canada in Victoria, Sudbury, Edmonton and Montreal. Curated by Janine Marchessault and Christian Kroitor. 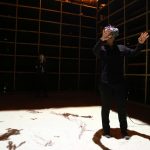 Artificial Nature: Conversation of Shadows is a site specific work for a gallery in the Seoul Innovation Center that was previously occupied by the Korea Center for Disease Control and Prevention for medicinal storage and animal experimentation. Created by Graham Wakefield and Haru Ji, with special thanks to Mark-David Hosale.