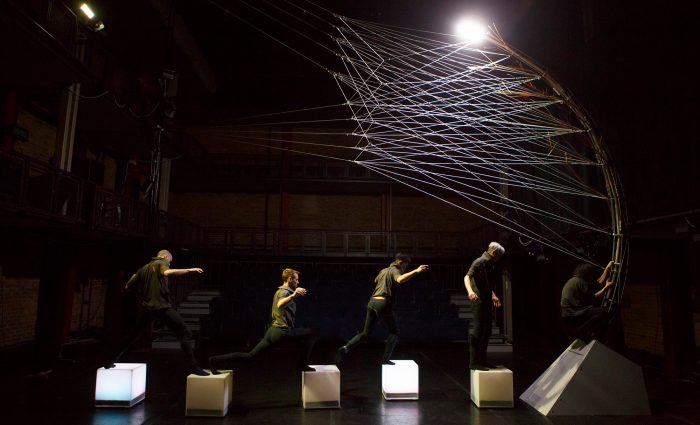 Choreographer William Yong proposes a future in which human labour produces energy and the pleasure of movement works to integrate technology into the social sphere. Thanks to a multi-year creative partnership with ground-breaking researchers at York University and interactive designers Aesthetec Studio, Zata Omm is undertaking a formal experiment of the most absolute practicality: What does a show that is powered by sustainability look like?

Lighting itself with energy created by the dancers, the audience and renewable sources, vox:lumen imagines a situation in which the necessity of illumination structures every human interaction. The performance confronts the audience with the most elemental metaphor for understanding, as dance becomes the interplay of darkness and light – the light we make ourselves. The audience is invited to help contribute to vox:lumen’s energy needs from March 4 to March 7 (an hour before the show) at Zata Omm’s Energy Fair in the theatre lobby.

Zata Omm Dance Projects is Zen and the Actualization of Modern Movement. Artistic Director William Yong has made the award-winning organization a site for research focussing on the integration of dance, technology and broader culture.