Images from books by Taien Ng-Chan: Maps of Our Bodies and the Borders We Have Agreed Upon and ribsauce.

Please join us Tuesday, May 7th for the next Sensorium Salon, featuring York University Cinema and Media Arts Professor Taien Ng-Chan. The conversation, moderated by Signy Lynch, will explore Taien Ng-Chan’s artistic research, delving into her pioneering use of research-creation methodologies in digital media, urban arts, and mapping practices. We look forward to exploring Ng-Chan’s work as a jumping off point to engage with larger questions surrounding artistic modes of research inquiry, and particularly those that explore the interface between art and urban ecologies.

Taien Ng-Chan is an interdisciplinary writer, media artist, researcher, and educator. Her work investigates everyday urban life through photography, cinema, poetry, and processes of mapping. Taien incorporates daily travel (from walking and riding the bus to bicycling and driving) as part of her art and research practice. She is a founding member of the Hamilton Perambulatory Unit (HPU). Currently, she teaches in Cinema and Media Arts at York University.

Signy Lynch is a PhD student in the Department of Theatre and Performance Studies at York. Her research investigates how direct audience address in contemporary performance can help audience members and performers to negotiate the complexities of inhabiting a twenty-first century globalized Canada. Signy is a member of the Centre for Spectatorship and Audience Research at the University of Toronto and secretary of the board of Cahoots Theatre.

Following our popular Salon format, the conversation will be preceded by a potluck dinner! Please RSVP to Sensorium Research Coordinator Alanna Dunlop (amdunlop@yorku.ca) for the event location near Christie Station in downtown Toronto. Let us know if you can bring a dish for the potluck (it is not required, but welcome). 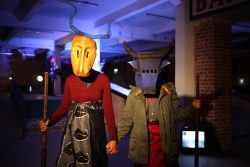 THE DISRUPTER X PROJECT is an ongoing collaboration between Pamela Phatsimo Sunstrum and Thenjiwe Niki Nkosi. The artists liberally describe this multimedia performance work as an ‘anti-opera’. The world of the anti-opera is created by video projections, live internet streaming, dioramas, holograms, handmade replicas of archival objects, original music created from archival instruments and live performers. ‘IF YOU DO IT RIGHT’ was the first iteration of the project and was performed in Nantes, France in 2013. In 2014 they presented ‘DISRUPTERS, THIS IS DISRUPTER X’ in Bayreuth, Germany. In 2015 they installed ‘NOTES FROM THE ANCIENTS’ in Johannesburg, South Africa.

Claudia Sicondolfo is a Vanier Scholar and doctoral candidate at York University (Cinema & Media Arts). Her doctoral research project examines educational and community outreach building within Canadian digital screen institutions, collectives, and film festivals. Claudia has worked extensively with educational communities across Canada and has published companion curriculum for interactive and traditional documentaries, including Highrise and Offshore. Her writing has also been published in Public Journal and is forthcoming in Senses of Cinema. She is co-chair of the Toronto Film and Media Seminar.

Pamela Phatsimo Sunstrum is Assistant Professor in the Dept. of Visual Art & Art History. Her multidisciplinary work encompasses drawing and animation, and alludes to mythology, geology and theories on the nature of the universe. Her drawings, narrative landscapes that appear simultaneously futuristic and ancient, shift between representational and fantastical depictions of volcanic, subterranean, cosmological and precipitous landscapes. Jess Dobkin in The Magic Hour at The Theatre Centre, 2017. Photo by Dahlia Katz.

**POSTPONED – Please subscribe to the Sensorium newsletter for updates on our rescheduled activities.**

Join us at the home of Sensorium Student Caucus member Melanie Wilmink for an evening of conversation between Sensorium Graduate Student Caucus member Signy Lynch (PhD Student, Theatre & Performance Studies) and Laura Levin (Theatre & Performance Studies). They will be discussing Laura’s new book project on performance and political culture in Canada, as well as the performativity of digital activism on social media platforms and in emerging social movements. Preceding the talk will be an informal potluck dinner! Laura Levin is Associate Professor of Theatre & Performance Studies at York. She is associate editor of Canadian Theatre Review (former editor in chief); editor of Theatre and Performance in Toronto and Conversations Across Borders (with Guillermo Gómez-Peña); co-editor of Performance Studies in Canada (with Marlis Schweitzer); and co-editor of journal issues on space, technology, and political performance. Laura is author of Performing Ground: Space, Camouflage, and the Art of Blending In, winner of the Canadian Association for Theatre Research’s Ann Saddlemyer Award. She is currently writing a book on performance and political culture in Canada and co-editing a CTR issue on Choreographies of Assembly (with Alana Gerecke). Her writing on the Women’s March and its relation to feminist performance art was recently commissioned by The Theatre Centre and appears here. Laura’s research focuses on contemporary theatre and performance art; performing gender and sexuality; site-specific and urban intervention; intermedial, digital, and political performance. She is co-investigator for the SSHRC Partnership Canadian Consortium on Performance and Politics in the Americas. Signy Lynch is a PhD student in the Department of Theatre and Performance Studies at York. Her research investigates how direct audience address in contemporary performance can help audience members and performers to negotiate the complexities of inhabiting a twenty-first century globalized Canada. Signy is a member of the Centre for Spectatorship and Audience Research at the University of Toronto and secretary of the board of Cahoots Theatre. Janine Marchessault is a Professor of Cinema and Media at York University, where she co-founded the Future Cinema Lab and served as Sensorium’s Inaugural Director. She is the author of Ecstatic Worlds: Media, Utopias and Ecologies (MIT 2017); Cosmic Media: Marshall McLuhan (Sage 2005); and (co)editor of numerous collections. Co-edited collections in preparation include: The Oxford Guide to Canadian Cinema and Process Cinema: HandMade Film in the Digital Age. Exhibition/Festival in preparation: XL OuterWorlds: Artists Celebrating Imax (Cinesphere 2019).

Melanie Wilmink is a PhD candidate in Art History and Visual Culture at York University, with honours such as the 2014 York University Elia Scholars Award, and a 2015 SSHRC Doctoral Fellowship. Her dissertation examines the inter-connectivity between spectatorial experience and exhibition spaces, and aims to determine how public art situations act as vehicles for metaphoric and physical transportation.