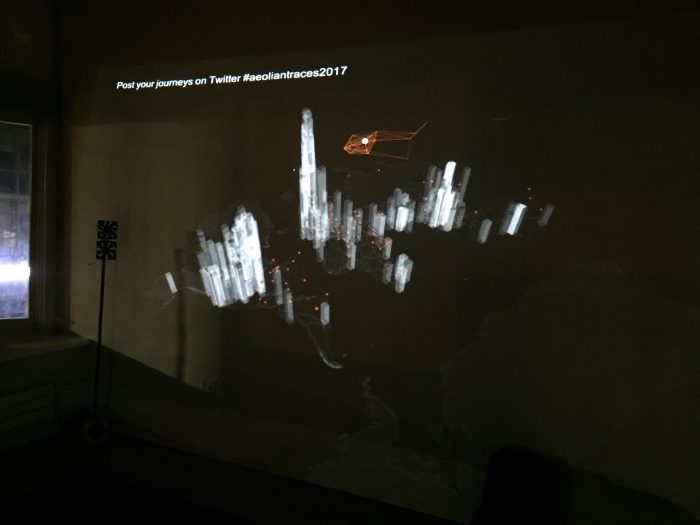 Aeolian Traces (2017 – present) is an immersive installation that utilizes a hybridization of data harvesting, physical installation, algorithmic composition and spatial sound. Presented through a combination of a multi-channel sound diffusion system and an 8-channel ventilator (DC motor fan) setup, the piece creates wind currents in a gallery space triggered by human migration data.

A screen displays the project’s informational content, visualizing migration data as suspensions of nodes in three dimensional space, and displays connections between each node as they come into close proximity with each other. To establish an ephemeral sense of movement around and about the visitor, the ventilators are synced with sounds of wind, where visitors to the space are able to simultaneously feel and listen to them. On the screen, each node represents a percentage of the migrant population from a particular country, geo-located and set in motion towards their documented destinations. Sound, image and wind are profoundly connected- the directionality of migration mapped to the movement of all three elements within the Ambisonic sphere. Spoken narratives in native languages are also introduced in the piece as whispers that reveal themselves as they passage from one location to another.

Aeolian Traces was first presented as part of the Windward||Windword exhibition at the Jacob Lawrence Gallery after a period of artistic and technical research at DXARTS at the University of Washington. It was further developed at the Alice Lab for Computational Worldmaking at York University in Toronto, and has been presented at the Seattle Art Museum (2017), as part of Nuit Blanche 2017 in Toronto, and at the Currents New Media Festival (2018).