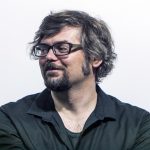 Graham Wakefield joined York University’s School of the Arts, Media, Performance & Design in 2014. He is appointed to the Department of Computational Arts, and holds a Canada Research Chair in Computational Worldmaking. He is the founding director of the Alice Lab in AMPD, a facility dedicated to the development of computationally literate art practice and  creative coding software for the construction of responsive artificial worlds experienced through rapidly emerging mixed/hybrid reality technologies. Dr. Wakefield is also a Core Member of the VISTA program.

Dr. Wakefield is an artist-researcher whose contributions include both scholarly research and the creation of works of art. His research-creation is founded upon a trans-disciplinary academic training in interactive art, music, virtual/augmented reality, mathematics and philosophy, partnered with extensive professional practice in software engineering for creative coding in audio-visual, interactive and immersive media.

Graham is an internationally exhibited artist of immersive and mixed-reality art installations, including the series Artificial Nature, an ongoing collaboration since 2007 with artist/researcher Haru Ji. These artworks present experiences of nature as it could be, through interactive worlds in which participants become one more component of an ecosystem, linking the generative open-endedness of biology and computation through aesthetic experience. The installations have been exhibited in numerous venues and events internationally including La Gaîté Lyrique/Paris andZKM/Germany, and have been recognized in peer-reviewed publications as well as organizations such as SIGGRAPH and VIDA.

Dr. Wakefield’s research is documented in numerous leading conferences, including a best paper award at NIME, journals including IEEE Computer Graphics & Applications, International Journal of Human-Computer Studies and Computer Music Journal, as well as popular texts such as O’Reilly’s Beautiful Visualization. Graham played a central role in the development of software systems and authoring content for the AlloSphere: a three storey spherical multi-user immersive instrument in the California Nano-Systems Institute. Graham is also a software developer for Cycling ’74, co-authoring the Gen software used by tens of thousands in the media arts environment Max/MSP/Jitter.