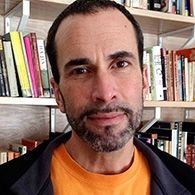 John Greyson is a filmmaker, video artist, writer and activist whose productions have won accolades at festivals around the world. The recipient of the Toronto Arts Award for Film/Video and Bell Canada Video Art Award, his feature productions include the “documentary-opera” Fig Trees (2009), Proteus (2003), The Law of Enclosures (2000), the docudrama Uncut (1997), Lilies (1996) and AIDS musical Zero Patience (1993). His most recent production is the interactive, trans-media “whodunit” Murder in Passing, a public art project in the form of a serial video narrative unfolding over the course of two months on Toronto subway platform screens, the web and social media. A case study in digital storytelling on an urban screen network, Murder in Passing is part of Professor Greyson’s research in the Future Cinema Lab, where he is a principal researcher.