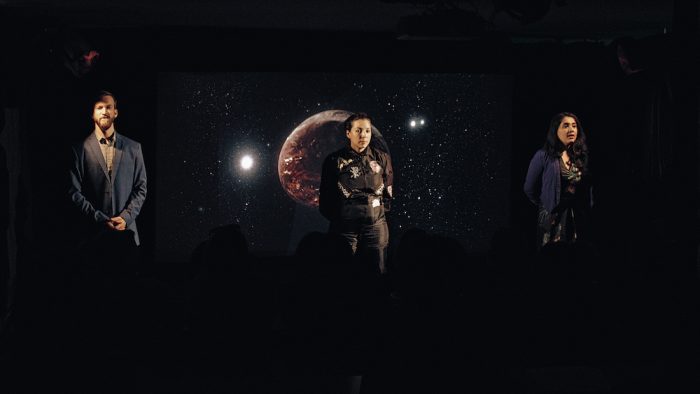 transmission is is an immersive theatre production that tells the story of two brilliant sisters selected to join a mission to meet our celestial neighbors. Their story is told through a live show at the 2017 Edinburgh Fringe Festival, a podcast, and several site-specific, augmented reality scenes that are linked to specific locations throughout Edinburgh.

transmission features 29 augmented reality scenes, distributed through the city of Edinburgh. Each scene offers a glimpse into the events leading up to and following humanity’s first interstellar journey. An app serves as the dossier for transmission, your guide to the world of Leila and Zada Karam, the Saena, and Luxtaterra. It delivers the geolocation and access to the related location-based content to audience members as you wander the city.

Using live performance, installations, and immersive video and audio to reveal the distributed story of the first manned interstellar mission to our closest exoplanet, transmission ‘haunts’ Edinburgh with the ghosts of an alternative reality future. Use the app to reveal the back story for the most ambitious project ever undertaken by humans, with the festival as your backdrop.